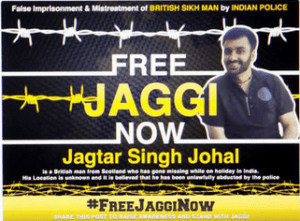 The gangster-like behavior of Indian authorities in arresting a Scottish born Sikh Jagtar Singh Johal for ‘influencing the youth through social media’ is a matter of major concern to the British Sikh community.

We understand Mr. Johal’s crime was highlighting Indian government atrocities in 1984. There appears to be little other information about the circumstances surrounding his case, other than the nature of his arrest and his handling by Indian authorities. Mr Johal was on holiday in Punjab, when according to reports he had a sack thrown over his head and was bundled into a van. Days later, his newly wed wife and family were told he had been arrested.

We like his Member of Parliament Martin Docherty-Hughes, want to make sure Mr Johal is treated fairly, his family is updated about his whereabouts, and that he has access to legal representation in the event the case against him progresses. Our Director Lord Singh, will be writing to the Foreign Office to flag his concerns. It cannot be right that a British citizen is treated in this way, his family deserves answers and his wellbeing is paramount.