We hope you can all please make your family and friends aware of a very important campaign to promote Organ Donation amongst the Punjabi, Asian and Sikh communities.

More than 10,000 people in the UK currently need an organ transplant. 1,000 people die each year (three people a day) because there are not enough organs available.

Organ transplants are much more likely to be successful if the organ donor and the person needing the organ are matched.

Nearly 20% of people requiring an organ transplant are from the Asian community but only around 1% of organ donors each year are Asian.

Sangat TV are showing a series of special Sangat Health shows on this topic every tuesday evening at 8.30pm. These were filmed in conjunction with City hospital in Birmingham and NHS Blood and Transplant

We urge you all to please sign up as an organ donor and very importantly, please let your family know of your wishes. 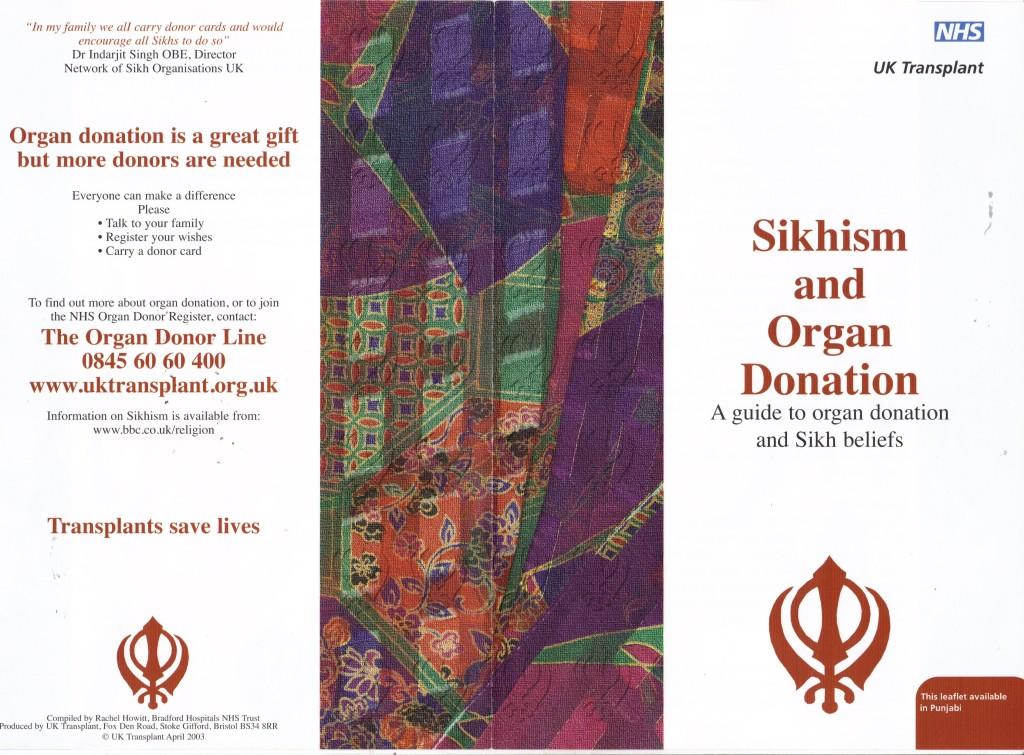 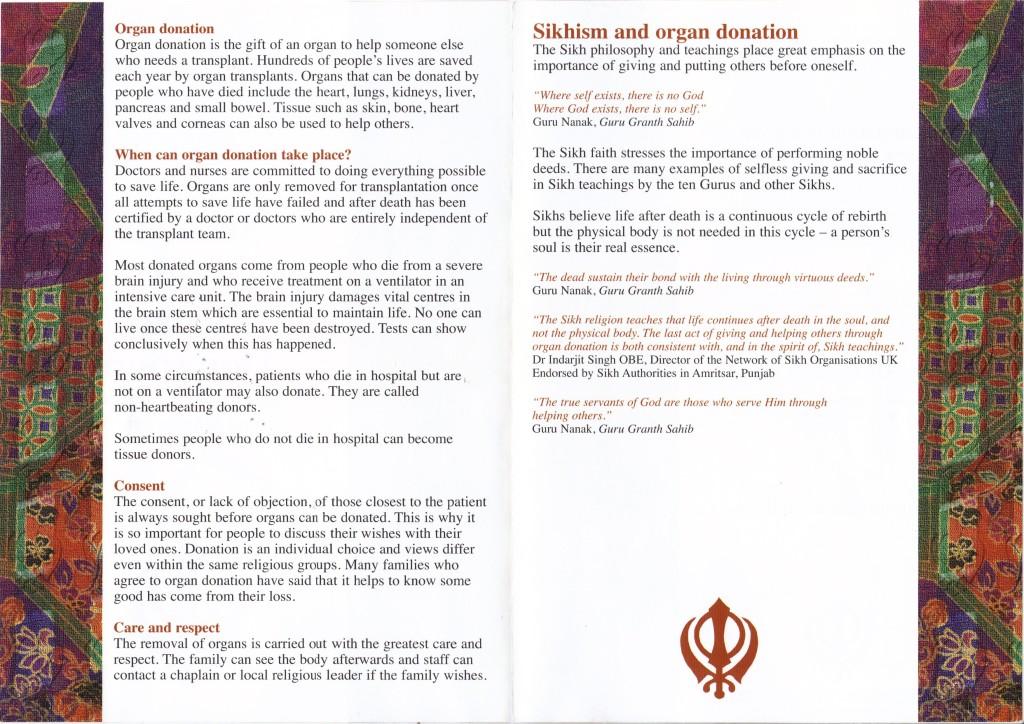 Below is a keynote address by Lord Singh

I would like to thank Kirat Modi and Professor Gurch Randhawa, and others who have worked hard to organise this conference, for inviting me to join you to give some personal reflections on challenges and opportunities resulting from rapid advances in medicine. I served for a while on the BMA medical ethics committee and was fascinated by the many new discoveries and the complex ethical challenges that now face us.

Today we are all living longer and bits and pieces of our body breakdown through age or disease but there is hope for repair and renewal through such techniques as organ donation. When we die our organs can be used to help others have a better quality-of-life or even save life. Organ donation and other advances in medical techniques often raise huge ethical questions. Ethical dilemmas in specific areas of medicine themselves change with the quickening pace of new research.

We all know that stem cells taken from embryos can help to grow new body tissue, but there has always been some unease over destroying potential life to help those already living. New developments however show the possibility that a person’s own skin or other tissue might be used by transforming cells into pluripotent stem cells which can be cultivated to form different body organs. To a layman like myself, the pace of change, to borrow a word from my grandchildren, is truly ‘awesome’.  I’m not quite sure how it was done but many of you like me would have been fascinated by a picture in our newspapers last week of a man in China who was made to grow a nose on his forehead which would be eventually transplanted to replace his existing damaged nose.

Coming back to organ transplants, many religions and cultures have reservations about the ethics of removing organs from a dead person to use for transplant purposes. It has to be noted that there are fewer reservations in the same religions and cultures about receiving organs to enhance or save lives. Some religions express concern about such techniques as a xenotransplantation, the removal of an organ of a different life form to repair damaged tissue. The fear, more cultural than religious, that an animal part, like a valve taken from a pig to repair heart damage leaves the person less whole. But most people take a wider view. Very few people for example, would object to vaccination against diseases such as smallpox. Here vaccines have their origin and base in animals, such as puss from cows being used at an early stage to cultivate the smallpox vaccine.

Another reason for a reluctance to donate organs after death is the fear that if a seriously ill person has given consent for organs to be removed after death, doctors might be less concerned in making strenuous efforts to save the life of the potential donor. There are many procedural safeguards against such a possibility and we all have much work to do in making these known to the wider public.

Linked to this is the fear that a loved one might not be really dead when clinically considered so. We sometimes read stories of people suddenly waking up at or on their way to a mortuary. The concern is that doctors may not always be right and we have to address such fears rational or irrational to increase donation.

Religion has a very powerful influence on people with some genuinely believing that the body must be left intact before burial or cremation. I believe that the essence of all religion is that it is better to give than to receive. Unfortunately when it comes to the donation or receipt of organs many take the opposite view and are much happier to receive organs rather than pledge to donate. Black minorities in this country and people here from the subcontinent have a donation rate which is something like a half of that of wider white population,  yet perversely the need for organs in these same communities due to genetic, lifestyle and dietary factors is almost twice as great. An article in this week’s British Medical Journal draws attention to these statistics. It also makes an interesting suggestion that priority for the receipt of a donor organ be given to those who have been on the donor register for three years. It is a suggestion that I strongly endorse.

Sikhs have no religious excuse for not being willing donors. Our 5th Guru Guru wrote’ False is the body which does not do any good to others (p.269) ’. And if we are required to use our whole being to do good to others while we are alive, and we believe that our soul leaves the body on death, there is little excuse for us not donating body parts after we die.

Religious texts in all our different faith were written long before medical advances made it possible for us to help others. But the principle of responsible living contained in Sikh scriptures make our responsibilities very clear.

Let me mention a few more of these in the words of Guru Nanak:

The dead sustain their bonds with the living through virtuous deeds

And again, the true servants of God are those who serve him through helping others.

Despite such clear teachings, there is still a measure of reluctance among some in the community. As with all communities there is what someone described as a yuk factor: a degree of squeamishness at the thought of donating our organs when we can no longer use them.

As with all religious communities there is a degree of ignorance in the Sikh community about the essentials of a background faith in which they were born. It is often taken as a sort of background culture.

Many Sikhs don’t have clear views on the merits of organ donation, but generally the principal of giving and helping others is understood and applauded.

For the record, I have put my own name on the organ donation register so, when God, Scotty or whoever, beams me up, anyone is welcome to my less than perfect bits and pieces. I wish them well. The Network of Sikh Organisations which I head, is doing what it can to promote a wider understanding of the need more donors coming forward from the community and we are getting positive support from the Sikh Doctor’s Association.

Before I go onto to suggest what more Sikhs and others in what is called the Black Asian and Minority Ethnic Communities (I don’t like the term) should or can do, I want to get a personal grumble off my chest. Every day we hear on the Today Programme of exciting new potential cures to all our ailments. It would be helpful if those doing the research would place a measure of the limits of confidence in the eventual success of such developments. Earlier this year we were told that mitochondrial replacement of the damaged battery part of cells would cure many hereditary diseases. More recent research seems to suggest the possibility of the procedure adding its own risk of genetic damage.

Let me end on a positive note of what our different communities can do. Our different gurdwaras, churches and mosques are strategically dotted around the country. They are ideally placed to be centres of action. But sadly there is tremendous inertial and a lack of education in our communities. Central umbrella organisations like the NSO should be sending people to different gurdwaras to inform and enthuse. But we have no resources; no government funding which is made freely available to pie in the sky projects like combatting extremism, or cosmetic ‘be good for a week’ type projects like national interfaith week. To me, true community cohesion and respect between different communities can only come through working together to help alleviate suffering through organ donation, and similar initiatives in other fields. It is through working together in worthwhile projects that benefit society that we begin to realise that that the differences between different faiths are far smaller than that which we have in common. Cohesion based on common respect and responsibility to others is the true way to social cohesion.

Thank you for listening to me.