Implications of Vaisakhi for Sikhs Today 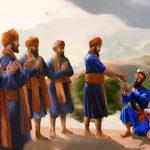 I would first like to thank the MoD for hosting this second Vaisakhi Conference, and Secretary of State for Defence Rt. Hon Michael Fallon and other guests for their kindness on joining us to celebrate one of the most important days in the Sikh calendar.

For Sikhs, Vaisakhi has an added and deeper significance. It was the day chosen by our 10th Guru, Guru Gobind Singh, to give Sikhs a distinct identity, symbolised by the turban and symbols of our faith. The question arises, why did the Guru, who taught the equality of all human beings, deliberately choose to make Sikhs distinctive and recognisable?

For the answer, we have to go back to a cold winter’s day in 1675, when the 9th Guru, Guru Teg Bahadhur, was publicly beheaded in Delhi by the Mughal rulers, for defending the right of the Hindu community, not his own religion, but that of others, to worship in the manner of its choice. It was a unique martyrdom for the cause of religious freedom for all. It was Voltaire who said, ‘I may not believe in what you say; but I will defend to the death your right to say it’. Nearly a century earlier Guru Teg Bahadhur gave that noble sentiment brave and practical utterance.

Following the beheading, the Mughal rulers challenged the followers of the Guru, to come forward to claim their master’s body. But Sikhs, who then had no distinguishing appearance, hesitated to do so. As we celebrate the Christian festival of Easter, we see a striking parallel with a key moment in Christianity with Peter’s denial that he was a follower of Jesus Christ, at the time of Jesus Christ’s martyrdom.

The tenth Guru, Guru Gobind Singh, thought long and hard about the momentary lapse of courage at the time of his father’s martyrdom. It was on the spring festival of Vaisakhi in 1699, that he decided to put the community to the test. Amidst all the fun and celebration, the Guru, suddenly emerged from a tent, sword in hand, and asked for volunteers who would be ready to give their lives there and then, for Sikh principles.

The crowed was hushed to silence fearing anyone who came forward might be harmed. A brave Sikh made his way to the Guru’s tent. Others followed.

After the fifth Sikh, had gone into the tent in response to the Guru’s challenge, the Guru again emerged from the tent, sword in hand. This time however, he was not alone. To the joy and relief of the crowd, the Guru was followed by all five Sikhs, wearing the five symbols of Sikhism, the most prominent of which is neat and uncut hair covered with a smart turban.

The Guru gave the five Sikhs Amrit (blessing and confirmation in the new Khalsa community), and said that in future, all male Sikhs would take the common name Singh, literally lion, as a reminder of the need for courage. At the same time, he declared that all female Sikhs would take the name or title ‘Kaur’, literally ‘princess’, as a reminder of the dignity and complete equality of women first taught by Guru Nanak. Guru Gobind Singh then did an extraordinary thing. He asked the first five members of the Khalsa, now known as the ‘panj piare’, to give him amrit. In a remarkable exercise in humility, master and disciple were now one.

Today, on this anniversary of that historic Vaisakhi, we need to consider the implications of the Guru’s injunction, Guru Manio Granth to life in the world of the 21st century.

In giving supremacy to the Holy Granth over all living leaders, Guru Gobind Singh warned us against false prophets who would try to distort the teachings of Sikhism to suit their own ends. Sadly, today, many Sikhs are chasing after people who are doing precisely this, and looking to superstitious short cuts to a supposed better afterlife, rather than to ethical living.

Guru Gobind Singh’s injunction, ‘Guru Manio Granth’, that is follow the teachings of the holy Granth as you would the founding Gurus, warns us against this distortion and dilution of Sikhism and the need to be true to the ethical teachings contained in our Holy Scriptures. It reminds us not to be passive in our belief, but be active in living true to the teachings. The message of Vaisakhi is that we must not only believe in the teachings, but also let these infuse into the pores of our very being and influence our action and reaction to the world about us, at all times.

In short it’s not enough to simply believe in teachings on equality, religious tolerance and social and political justice as worthy ideals. The message of Vaisakhi is that we must make the furtherance of these ideals the central goal of our lives. We must work together to ensure that the light of the Guru’s teachings reach the furthest corners of our troubled world.

Sikh teachings on human rights have much to offer to a world that has clearly lost its sense of direction. A world in which greed and profit are put before human rights; a world which daily reports of neglect of vulnerable youngster and the frail elderly; a world in which members of the so-called Security Council supply more than 80% of the means of killing in a world awash with arms; weaponry all too easily available to cruel and arrogant leaders. I could go on.

In the past, in India as well as in Europe, religious leaders often amassed power and wealth for themselves, ignoring the need for fairness and justice in society while telling the poor and suffering about promised rewards in heaven. Secular society has gone the other way, arguing that religion should be a private affair and not be allowed to interfere in a materialistic pursuit of wealth and happiness in its blind pursuit of a better life, not in the hereafter, but here and now; and the result is again, power and wealth for some and suffering and cruel hardship for others.

I’ve spent some time in building and construction, but it doesn’t need a construction qualification to understand that that a structure build on inadequate foundations will inevitably suffer damage. Similarly, a blind pursuit of material happiness that ignores the need for the ethical underpinning of society, inevitably results in the cracks in society that we see today.

True ethical underpinning means that human rights, gender equality and concern for others must predicate all we do. They should not subservient to trade and the pursuit of power and privilege as they were a century ago and still are in many parts of the world. Vaisakhi reminds us, that it is the duty of us all to demolish this divide between religious teachings and secular living.

At the same time, Sikhs are duty bound to break down the artificial barriers of superiority and exclusiveness between different faiths and show commonalities far greater and more important than supposed differences.

The task of moving society to more responsible living is not an easy one. It requires the dedication and total commitment inherent in the message of Vaisakhi.