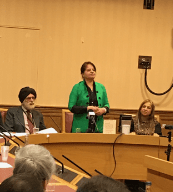 Full talk given by Lady Singh at the launch of Lord Sheikh’s book Emperor of the Five Rivers at The Nehru Centre on the 6 September 2017.

My Lords, Ladies and gentlemen, Good evening. Thank you Lord Sheikh for giving me this opportunity to say a few words on this joyous occasion if the launch of the book Emperor of the Five Rivers. I am delighted and indeed honoured to have this opportunity. In only ten minutes, I will try to do some justice to this superbly written book. Usually we say that no self respecting Sikh will speak less than an hour. Let’s see.

Emperor of the Five Rivers provides a fascinating insight into an important period in Sikh history. It is both a well researched and reference book for the serious scholar and an enjoyable read. The author is to be congratulated for a remarkable addition to Sikh literature.

The book is set against a background of British expansion in India and the savage culture of the times. It provides a fascinating account of Ranjit Singh’s generosity, courage and extraordinary humanity in an age of unabashed greed and cruel regimes.

I found it a well researched book, with helpful references providing vivid examples of Ranjit Singh’s humility and compassion and extraordinary diplomatic skills. It also shows his human weaknesses including a fondness of wine and beautiful women.

Appropriately the story begins with how the teachings of the Sikh Gurus helped shape Ranjit Singh’s character and his attitude to religion and politics. We learn that the young Ranjit was virtually illiterate but possessed a sharp brain and an intense interest in the world about him. He would sit for hours in the gurdwara [a Sikh temple], listening to the stories of the Gurus and the respect they showed to the people of other religions. 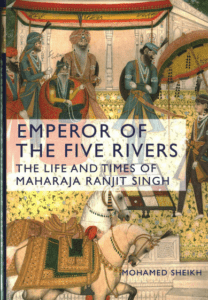 The book shows how these teachings had a huge influence on the young Ranjit and the way in which behaved to both his subjects and his defeated enemies, in his sprawling empire which extended beyond the subcontinent to Kabul and Tibet, earning him popular acclaim as the ‘Lion of Punjab’. His inclusive attitude to other religions and nationalities is shown by the fact that he employed several French and European generals in his army and that more than half of his governing cabinet consisted of non- Sikhs.

Even in those early days Sikh Gurus’ teaching of equality of women with men was not forgotten by Ranjit Singh. Among his most famous commanders was his mother in law Maharani Sada Kaur, who was leading her armies at Lahore, Amritsar and other places. She was his advisor and a confidante for many years.

As Lord Sheikh writes, ‘ He handed responsibilities to those best able to discharge them, whatever their religion.’Again on page 47, Far more important aspect of Ranjit’s religious faith was its tolerance. Unlike either Islam or Christianity, Sikhism was not a missionary religion. Sikhs believed utterly in their religion and were only too happy for others to join them, but they did not try to coerce anyone to do so. Nor did they view non-Sikhs with contempt. This attitude underpinned Ranjit Singh’s entire religious outlook. Many calls him a secular ruler, but as pointed out by Lord Sheikh, Ranjit Singh was a Sikh ruler in the true sense whose rule was secular.

The author notes many examples of Ranjit Singh’s humility. He struck a coin for the investiture that paid tribute to Guru Nanak and Guru Gobind Singh, he dispensed with his right to wear his crown or sit on a throne. He continued to preside over the Darbar sitting cross-legged on a modest chair. His modesty was entirely in keeping with the republican nature of Sikhism, and in total contrast to the way in which oriental kings normally presented themselves. Story of a Muslim calligraphist who had spent years transcribing the Qur’an beautifuly by hand was about to leave the Punjab to sell his product as no one would buy it. Ranjit summoned him to an audience, respectfully pressed the piece of work against his head, purchased it giving more than the asking price and later presented it to Fakir Aziz-ud-din.

Ranjit made it an ironclad rule that his armies would not indulge in carnage, burn holy books or destroy places of worship. The civilian population would remain free to carry on with their normal activities and no women were to be molested. When Ranjit rode through Peshawar after wresting it from the Afghans, the holy people of the city prayed openly for his long life.

It was not only Hindus, Muslims and Sikhs who enjoyed his generous patronage. Among his advisers in the highest ranks of his army , were French, English, Scots, Americans, Hungarians, Russians, Spaniards and Greeks.The Maharaja, illiterate but thirsty for knowledge would spend hours with these ‘firangees’, as they were called, learning about their country and their way of life.

The book gives a fascinating insight into the diplomatic intrigues of the East India Company and the British government; the shadow boxing between the Sikhs and the British, each wary and respectful of the other’s strength. We learn how the astute Ranjit Singh successfully countered British moves to extend their domination and control to the fertile and rich area of Punjab. Each side would maintain outwardly cordial relations with the other indulge in lavish hospitality and the exchange of fine gifts, while at the same time spying on the military strength of the other.

Emperor of the Five Rivers shows, in an easily readable way, how under Ranjit Singh’s enlightened rule, Punjab and the other areas enjoyed peace and prosperity for forty years. This part of the continent had seen only conflict and suffering, and sadly is still experiencing terrible conflict and religious extremism.

The Maharaja is shown as a knowledgeable patron of the arts with a priceless collection of jewellery, shawls and other beautiful works of art. He gave generously to gurdwaras and religious buildings of other faiths, not only in Punjab but other parts of India. He gave endowments and charities to all religions – put gold on Hermandir Sahib, became known as Golden Temple, gold plated temple in Banaras.

In the two Anglo Sikh wars of the 1840s the brave virtually leaderless Khalsa Army was narrowly defeated but not before it had shaken British rule in India to its very core. The author ruefully observes that if its leaders had not made shameful deals with the British, the whole history of the sub continent would have been entirely transformed.

Maharaja Ranjit Singh was one of the most charismatic figures in Sikh history who ruled much of North India including Punjab, present day Pakistan and Kashmir from 1801 until his death in 1839. Think of the romantic image that Richard the Lionheart has in English history: add to it the judgement and wisdom of Solomon and you have some idea of the place that Maharaja Ranjit Singh, ‘Lion of Punjab’, holds in the heart of every Sikh, Hindu and Muslim in Punjab.

Ranjit Singh was powerful enough to have ruled in a totally autocratic way. Instead, he saw himself as the head of a commonwealth and took decisions only after consultation with other Sikh and non-Sikh leaders. It was fine while he lived. He was the hub at the centre, the referee between selfish and often conflicting interests. Ranjit Singh’s own personality was the glue that kept together a vast and sprawling empire. In military terms, Ranjit Singh’s commonwealth was so strong that even the all-powerful English to the South, though keen to establish their influence northwards, hesitated to face him on the battlefield. For some two generations, Punjab enjoyed, for the first time in its entire history, truly secular government.

And then in 1839, Ranjit Singh died and it all fell apart. Internal feuding between warring factions took place. There was treachery and betrayal. The English saw their chance. Two hard fought wars between the largely leaderless Sikhs and the English ensued and,within ten years, nothing was left of Ranjit Singh’s vast empire.

The strength of the Rule under Maharaja Ranjit Singh lay in the power source of Sikh teachings. Ranjit Singh was fired by the ideals of equality, selfless service, humility and concern for the less privileged. When those that followed Ranjit Singh, ignored these ideals, decay was certain.

We have a great lesson to learn from this book. Emperor of the Five Rivers clearly shows us that Sikhs Hindus, Muslims and by today’s extension Christians and Jews can live together in peace and harmony if their rule is even handed, be they elected, selected or hereditary.

A thanks to Lord Sheikh for bringing true history to us, without any bias. When I interviewed him for Sikh Channel and asked him how Ranjit singh was so well versed in all areas of administration, his reply was that Ranjit Singh was ‘a genius’. This one word genius, very appropriately describes the man of his book Emperor of the Five Rivers.

Thank you for giving me an opportunity to speak at the launch of your book and thank you all for listening to me.