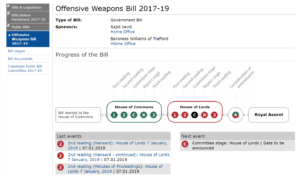 Our Director Lord Singh intervened in a debate on the second reading of the Offensive Weapons Bill earlier this week to ensure the Sikh practice of honouring people with full-length kirpans is fully protected under law. As it stands, the draft Bill retains the existing legal protection for the religious use of a kirpan, however ‘honourary’ kirpans – given to dignitaries (not just Sikhs) as an appreciation of service, would fall outside the proposed legislation and be criminalised. This concern was not addressed in either the Commons debate or in the minor wording change in the ‘photo op’ meeting of the Sikh Federation UK (SFUK) with government officials.

During the debate on Monday, Lord Singh said: ‘My Lords, I too believe that the Bill is both timely and necessary. As a Sikh, I would like to voice my appreciation of the sensitivity shown by the protection of the existing right of Sikhs to wear a short kirpan for religious reasons. However, it appears that the common Sikh practice of presenting a full-length kirpan, or sword, as a token of esteem or appreciation to those who have made a significant contribution to Sikh ideals, such as tolerance and respect for other faiths, has been overlooked and is not currently protected.’

He added: ‘The recipients of this honour do not have to be Sikhs. I have made presentations on behalf of the Sikh community to His Royal Highness Prince Charles, when he joined us as the main guest at a major function at the Royal Albert Hall, and to the late Lord Weatherill, the former Speaker of the House of Commons, for his work with the Sikh community in India and Britain. Years earlier, the Sikh community in Leicester honoured Sir John Templeton, founder of the Templeton Prize, after he awarded me the UK equivalent, for furthering religious understanding.

For Sikhs, this custom is no less important than the protection given in the Bill to the use of a sword for theatrical performances or for its keeping for historical reasons. Unfortunately, the presentation and keeping of this token of esteem is not protected in the proposed legislation. It is important that, as the noble Lord, Lord Lucas, so eloquently put it, we do not criminalise people unintentionally. On behalf of the UK Sikh community, I will seek a small amendment to the existing wording to ensure that the presentation and receipt of this traditional ceremonial Sikh honour remains protected.’

The Offensive Weapons Bill (sponsored by the home secretary Sajid Javid) was published on 20th June 2018 and is now scheduled to go to committee stage in the House of Lords.[i] The Bill covers three types of weapon – acid, knives and offensive weapons, and firearms. Although SFUK issued a statement on 21st November 2018 describing an amendment to the Bill (coordinated by Preet Gill MP) for ‘larger’ kirpans titled, ‘Kirpan victory: Ministers listen and back Sikh community’, it transpires this so called ‘victory’ was a premature celebration as it didn’t do what was needed, that is, cover ‘honourary’ kirpans. The NSO with support of concerned members of the Sikh Council UK aims to ensure the kirpan is given full protection under law and cross-party peers agree it is necessary.