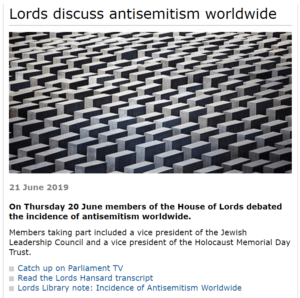 Our Director Lord Singh of Wimbledon contributed to a debate on anti-Semitism secured by Baroness Berridge in the House of Lords this week.

He said, ‘I have visited Auschwitz and seen something of the horrors that thousands of Jews—innocent men, women and children—suffered. In the collective madness of the 1930s and 1940s, Jews were vilified not only in Germany but across much of Europe, including this country. As child I was frequently called a Jew by those who wished to hurt me. However, I believe that talk of a worldwide anti-Jewish conspiracy is misleading and, importantly, takes us away from the real problem which is the way in which unprincipled politicians play on ignorance and majority bigotry, regardless of the consequences suffered by others, to achieve their ends.’

Reflecting on the year we mark the 35th anniversary of the Sikh genocide in India and the persecution of Sikhs in Afghanistan today, he went on:

‘In Germany, Hitler blamed the Jews. In the India of 1984, it was the tiny Sikh minority. The killing of innocents in gas chambers is evil, but is it any more evil than dousing men, women and children with kerosene and burning them alive? In Hitler’s Germany, Jews were made to wear distinctive clothing to show their inferior status. More recently, a decimated Sikh community in Afghanistan has been made to wear distinguishing patches and to fly a yellow flag outside their homes to make them an easy target for majority bigotry. Majority bigotry knows no boundaries and, as my noble friend Lord Sacks reminded us, has no constraints.’

He added: ‘We like to believe prejudice is found in only a few. Sadly, it is far more widespread. We are all, in effect, hard-wired to be wary of difference. Unacceptable but understandable prejudice is easily manipulated to become irrational hatred. Since the Second World War, we have seen unspeakable acts of violence against targeted groups in Cambodia, Rwanda, and Bosnia, and I could go on. Special sympathy-seeking terms such as anti-Semitism or Islamophobia are understandable, but they take us away from the real problem, which is combating the more widespread bigotry suffered by all faiths. To borrow from Shakespeare, if Hindus, Muslims, Sikhs and others are cut, do we not bleed? ‘

Concluding his speech Lord Singh said, ‘Taken to an extreme, this giving of special consideration to some groups at the expense of others is, at best, unintended racism. Bigotry will continue to flourish until, in the closing words of the Sikh daily prayer, we look beyond ourselves and our group to the well-being of all members of our one human family.’