Why the government must improve on its level of religious literacy 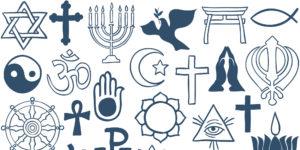 It matters that people learn about religion. The Network of Sikh Organisations (NSO) has long stressed the importance for us all to have a basic understanding of all the major faiths, which in turn, motivate the behavior and attitudes of significant numbers of people in Britain. In understanding the role of religions in society, we provide ourselves with an informed platform to better engage with others.

Last week our Director Lord Singh asked the government, “What steps they are taking to combat religious extremism and to promote a cohesive society by enhancing religious literacy at all levels of government.”

Minister of State, Baroness Williams of Trafford responded by informing peers the government is countering extremism through Prevent. She said, “We are working closely with faith groups to understand the impact of policies and to improve religious literacy in government. The Home Secretary and the Communities Secretary hosted a round table for representatives of all faiths last November.”

Unsatisfied with the Minister’s response, Lord Singh added: “The Government paper on the hate crime action plan contained no mention of non-Abrahamic faiths. That suggests something about the religious literacy there. Does the Minister agree that democracy implies being attentive to the legitimate concerns of all sections of the community, not those of a single religious or other majority?”

He went on: “Does she further agree that teachings and practices that go against human rights must be robustly challenged, but that we need to know something about what we are challenging before we can do that? Programmes like Prevent cannot be effective without such knowledge. One final point is that I have put the basics of Sikh teachings on one side of A4 at the request of the DFE, and that can be done for other faiths as well. Should that not be essential for religious literacy in government departments?”

The Minister responded thus: “He said that the hate crime action plan did not specifically refer to non-Abrahamic faiths, but the tenets of the action plan cover points on hatred on the basis of religious belief, disability, sexuality and so on. It is therefore implicit within it that, for example, Sikh communities are included.”

She added: “As for the understanding of religious literacy within both government and wider society, both the Home Office and DCLG engage widely and often with faith communities. Shortly after the referendum, I myself met people from different faiths, including Sikhs, in Manchester to discuss religious literacy, the outcome of the referendum and the corresponding hate crime attached to it.”

It is encouraging to hear the Minister often engages with faith communities. However her response didn’t acknowledge the government’s failure in including faiths outside the Abrahamic traditions in Action Against Hate – the government’s four-year hate crime plan. The NSO believes that improving religious literacy in government circles can only enhance policy development, and prevent any future exclusion of minority faiths that aren’t as vocal in their approach to lobbying. 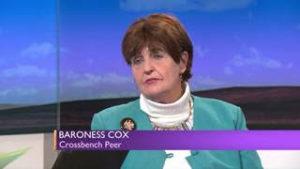 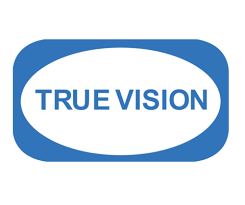 In a recent communication, ahead of Holocaust Memorial, Communities Secretary Sajid Javid announced £375k of new funding to support groups who have “historically faced challenges in reporting and preventing hate crime.”

Part of this funding will be given to the Police hate crime portal True Vision, which will be building a programme to help support Sikhs and Hindus in the reporting of hate crime. The funding also aims to help develop an awareness of hate crime against both groups. The government has acknowledged part of the problem is because of “anti-Muslim hostility.”

This announcement comes following years of campaigning by the NSO in highlighting the government’s biased ‘Abrahamic-centric’ approach. During that time, we have highlighted the issue in the press, had communications with both DCLG and the Home Office, whilst our Director Lord Singh has raised concerns in the House of Lords.

Following the government’s publication of Action Against Hate last July; we made our concerns clear to the Home Secretary. These were supported by leading Hindu and Sikh organisations. We raised the issue at a Faith Communities Forum meeting last September, organised by the Interfaith Network UK.

Pt Satish K Sharma General Secretary of the National Council of Hindu Temples UK said, “we have been in extensive discussions with the Sikh community regarding the manner in which the Dharmic traditions have been quite effectively abandoned in terms of protection and fully support the statements made by Lord Singh in this regard.”

He went on, “recent official statements and gestures indicate that the severity of the situation may be noted but action, funding and genuine engagement will establish whether this is mere lip service or just the latest in a series of sound bites.”

Mr Sharma added: “Unlike other groups, Hindu and Sikh communities have never played the politics of victimhood, focusing more on their contribution to the societies they live in. When they do become victims of hate crimes, requesting recognition and support, requires the development of a whole new social vocabulary.”

Lord Singh said, “the news is certainly a step in the right direction, but there is a long way to go in order to achieve a level playing field for all faiths. Improving religious literacy levels is also important when tackling prejudice fueled by ignorance. It’s good to see the government is willing to listen and learn.”

Prior to the recent announcement, the NSO gave evidence to the Home Affairs Select Committee into its inquiry into hate crime and its violent consequences. At the time, we specifically requested support in raising awareness of hate crime portal’s like True Vision. A link to our evidence can be found here.

We have decided to make the latest edition of the Sikh Messenger available to download for free. 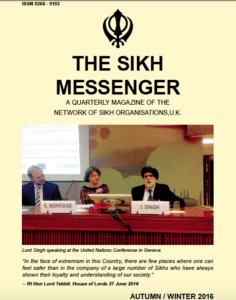