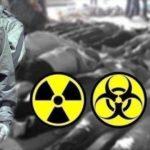 Members of the House of Lords called for a ‘credible investigation’ into the chemical weapons attack in Syria, which was responsible for over 70 deaths in Khan Sheikhoun, Idlib on Tuesday.

According to UK-based monitoring group the Syrian Observatory for Human Rights, 20 children and 52 adults were killed in the chemical incident.

Calling for an investigation into the atrocity, Baroness Northover said: “If it turns out to be sarin from the regime’s stocks, what actions will be taken to ensure that this time there is full destruction of all Syria’s chemical weapons?”

Referring to a recent US military airstrike against IS which killed a significant number of civilians, Lord Singh said: “My Lords, does the Minister agree with the sentiments of the great human rights activist Andrei Sakharov, who said that there will be no progress on human rights until we are even-handed in condemnation?”

He went on: “Having said that, does she further agree that the indiscriminate bombing of civilians in Mosul should be equally condemned as the chemical attack? For survivors and for the relatives of those killed and maimed, it is equally bad.”