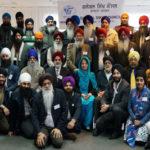 Former Vice-President Lady Singh’s election to head the group was met with approval from delegates from 18 countries at the AGM. A representative from an umbrella body of Malaysian Sikhs in attendance expressed his confidence in the new appointment. “She is a capable person,” he told Asia Samachar.

The organisation was initially set up in Australia in 2014, to establish a coalition of national Sikh organisations from across the globe that would fearlessly promote values and policies consistent with Sikhism.

On her appointment Lady Singh confirmed one of the GSC’s aims is to promote the primacy of the Nanakshahi calendar, so this gives uniformity to the celebration of Gurpurabs.

She said, “We will actively encourage the recruitment of bilingual preachers for gurdwaras in the West so young children and adults who don’t speak Punjabi can understand their faith.”

She is committed in dispelling misconceptions about Sikhism, which she said, “are being propagated in some influential quarters by those who are willfully attaching a false mythological narrative, which totally undermines Sikh ethos and teachings.”

Along with her new role, Lady Singh continues as Education Inspector and consultant responsible to inspect religious education in Sikh Schools for the Department of Education. She is also the Deputy Director of the Network of Sikh Organisations.