NSO Writes to Author of Aurangzeb: The Man and the Myth 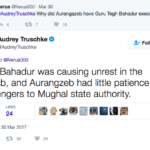 The NSO has written to an American academic after concerns were flagged about a controversial statement in her book Aurangzeb: The Man and the Myth.

Audrey Trushcke, Assistant Professor of South Asian History at Rutgers University said Aurangzeb executed Guru Tegh Bahadur because he was ‘causing unrest in the Punjab.’ The same comment has been recently made by the Professor on social media.

In a communication to her this week the NSO stated: “As an expert on Aurangzeb you are no doubt aware he imprisoned his own father and murdered his own siblings. Not the actions of a loving son or brother, I’m sure you’ll agree.”

It went on: “His bigotry towards and persecution of India’s minority faiths is widely acknowledged and documented. It’s with this backdrop that a delegation of Kashmiri Pandits approached Guru Tegh Bahadur in 1675. They had been given an ultimatum by Aurangzeb to convert to Islam or perish, a policy we see with modern day ISIS in Syria and Iraq with the persecution of Christians and Yazidi minorities.”

We specifically asked: “How can standing up to religious extremism, bigotry and totalitarianism be possibly described as ‘causing unrest?’ Please do explain.”

At the time of writing we have had no official response from the Professor or the publishers of her book.