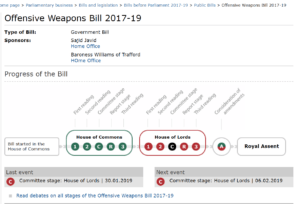 Our Director Lord Singh continues to work with cross-party peers to ensure the kirpan gets the full legal protection it requires, with proposed amendments to the Offensive Weapons Bill (OWB). Under current legislation the kirpan has an exemption from the provisions relating to the possession of an offensive weapon under the Criminal Justice Act. All that was required, is to include a clause to protect longer kirpans gifted to Sikhs and non-Sikhs as a sign of honouring contribution to society – recipients of whom include senior police officers and the former British Prime Minister Tony Blair.

The failure of Sikh MPs to address this gap in the House of Commons made it necessary for Lord Singh to retrieve the situation. Cross party support was readily given, and Lord Kennedy supported by Lord Paddick tabled an amendment to ensure the kirpan is fully safeguarded under British law.

Despite the failure to address this in the House of Commons, on 21st November 2018, the Sikh Federation UK (SFUK) who run the APPG for British Sikhs, bizarrely announced a ‘victory’ on social media with an accompanying ‘photo op’ with Ministers.

On 30th January 2019, peers discussed proposed amendments to OWB at committee stage in the House of Lords.

‘My first ask of the Minister is that she meet my noble friend Lord Kennedy, the noble Lord, Lord Singh of Wimbledon, and representatives of the Sikh community. In asking for a meeting, I put on record that the status quo is not adequate, as it only provides a defence of religious reasons if a person is charged with a criminal offence. It does not cover other reasons such as ceremonial, historical or sporting, where kirpans are offered as gifts to dignitaries. The status quo only provides a defence if a person is charged—the amendment in the name of my noble friend will provide an exemption for the possession of kirpans. The amendment will provide specific reference in the law for the kirpan, which Sikhs have been calling for.’

‘My Lords, I thank the noble Lord, Lord Tunnicliffe. I shall give just a little background. Sikhs are sometimes referred to as a martial race. The description is wrong on two counts: we are neither martial, nor are we a race. Sikh teachings criticise all notions of race or caste, emphasising that we are all equal members of one human race.’

He added, ‘The martial assumption comes from the fact that Sikhs have had to endure being a persecuted minority for many years—at one time, there was a price on the head of every Sikh caught dead or alive. Sikhs have had to develop dexterity with a sword to survive, and, importantly, to protect the weak and vulnerable of other communities in society. Kirpan, the Sikh word for sword, means “protector”, and figures prominently in religious practice and ceremony.’

Amendment 70 was withdrawn in line with convention in the Grand Committee, however there was unanimous support from all parties including the government, for the need to effect change in order to fully safeguard the kirpan in law. 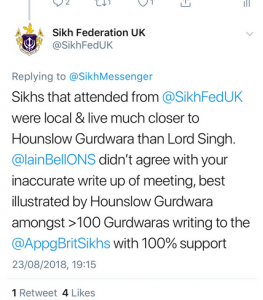 (Left: Tweet in which SFUK falsely suggest Hounslow gurdwara (Alice Way) was one of 112 gurdwaras which supported their failed ‘ethnic’ tick box campaign)

The Sikh Federation UK (SFUK) is the successor body to the International Sikh Youth Federation (ISYF) which was de-proscribed from the UK’s list of organisations proscribed under the Terrorism Act 2000 in March 2016.[i]

Over the years, the Network of Sikh Organisations (NSO) have become accustomed to their modus operandi. They no doubt, have been particularly successful in plugging their often grievance filled narrative on social media. We have had to address misleading statements made by SFUK regarding their now failed ‘ethnic’ Census tick box campaign aimed at limiting a world religion to a single ethnic group. We are still waiting for them to disclose the list of gurdwaras they say supported their campaign for a separate tick box in the 2021 census. We have concerns given what we discovered about Hounslow gurdwara (Alice Way). SFUK tweeted to say they were one of the gurdwaras who supported their campaign, but the committee categorically refuted this in writing.

As you can imagine the SFUK who run the APPG for British Sikhs are angry that the ONS decided not to recommend a Sikh ‘ethnic’ tick box in the White Paper. All concerned with getting full protection for the kirpan would applaud Lord Singh for his initiative in the Lords to rectify the Commons error. Instead, the SFUK predictably, began to throw their toys out of the pram by attacking Lord Singh with a post on Facebook on 31st January titled: ‘SHOCKING, IGNORANT AND OFFENSIVE COMMENTS MADE IN HOUSE OF LORDS’. They write:

‘Soon after 9/11 someone advised the government that Sikhs can wear miniature wooden or plastic Kirpans. Some automatically assumed it was Indarjit Singh ..’

What the SFUK haven’t disclosed is that following legal action, one of their leading supporters gave Lord Singh a written apology in May 2015 for inferring Lord Singh had given advice to the government that is was OK for Sikhs to wear ‘a wooden kirpan’. It is simply not true and the repeated inference in the statement above posted on Facebook repeats the libel. We’ve discussed why Lord Singh and other cross-party peers were forced to intervene in the 2nd debate on the OWB above. It is to fully safeguard the kirpan in law, something which should have been done in the House of Commons, despite a SFUK declaration of ‘victory’ on the matter and ‘photo op’ with a Minister and the Chair/Vice Chairs of the APPG for British Sikhs (for which they are secretariat).

SFUK who’ve previously referred to Lord Singh as ‘a dinosaur’, also complained on Twitter about Lord Singh’s comment ‘we are neither martial, nor are we a race’ – but they failed to include his full speech and context given above.

The Guru’s taught us to ‘recognise the human race as one’, and the fledgling Sikh community had to defend itself to survive persecution – the circumstances transformed the community into one which was ready to defend itself and others from tyranny. However, the ‘martial race’ theory was propagated by British military scientists, who wanted to increase enlistment to the British Indian Army during the Great Wars – categorising Gurkhas, Pathans, Hindu Punjabis and Sikhs in this pseudoscientific category. It is not consistent with Sikh teachings.

SFUK remarkably tweeted: ‘A martial race is one that is brave and ready for battle. It appears Lord Singh would like to see Sikhs as ‘Indians’ unfit for battle’. We are not sure what ‘battle’ the SFUK think they are fighting and how Lord Singh’s speech could be possibly interpreted as suggesting Sikhs were ‘unfit’. We do not think it is ‘brave’ to publish misleading posts on social media.

The saddest part of all of this is the way in which SFUK’s misleading post which selectively quoted Lord Singh’s speech, has been received by a vocal minority who follow them on Facebook and other social media platforms. The nature of the SFUK supporters is illustrated by comments like the following below which contribute nothing towards a rationale and reasoned debate.

Manj Onetel ‘He’s a Dogra, the enemy within, claiming to represent Sikhs without being elected or selected to do so. Non Sikhs are more supportive of Sikh issues than these keshadhari Hindus- he has no rehni behni other than the outer appearance literally a lions garb on a sheep.’

Comments on the SFUK Facebook page under the post vary from being plainly rude, conspiratorial, but some disturbingly ageist in nature, like the SFUK previous reference to Lord Singh as ‘a dinosaur’. The individuals concerned should be utterly ashamed of themselves. Following the publication of the despicable ‘karma’ tweet after the death of Sir Jeremy Heywood last November, which the SFUK apologised for, we are by no means surprised by their modus operandi and the odious comments of some of their followers on Facebook. We imagine those in government circles won’t be too surprised either.