“Stand up and be counted” – The message of Vaisakhi 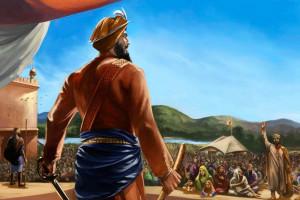 Vaisakhi 1699, the Birth of the Khalsa, inaugurated by Sikhism’s 10th Guru, Gobind Singh

I would like to start by thanking the MoD for hosting us in this august and historic building, and to Mandeep Kaur, our Sikh chaplain to the armed services for her hard work organising the function.

Vaisakhi is a traditional spring festival in northern India celebrating the gathering of the winter harvest, and, like spring festivals everywhere, a time for new beginnings. Appropriately, the spring festival of Vaisakhi was chosen by Guru Gobind Singh to formalise Sikhs as a community of equals, ready to stand on its own without the guidance of further living Gurus. History records that on that historic Vaisakhi day in 1699 he tested the resolve of Sikhs, to stand up and be counted and be ready to give their all upholding the egalitarian teachings of Sikhism, no matter how daunting the challenge.

To his delight, Sikhs proved equal to the challenge. It was then that he gave us a distinctive identity to tie to us to a public commitment to live by, and if necessary die for, Sikh values which are universal values of selfless and responsible behaviour, codified more than 500 years ago; values that the West now call British values or European values. These are: a belief in the equality of all human beings, including the dignity and full equality of women; putting the concerns of others before our own, selfless service and, importantly, standing up for rights of all faiths and beliefs to live true to their own way of life

Today, many question the need for a visible identity? It’s divisive, why cannot you simply live by the principles of your faith; without a distinct identity? It is a question that is best answered by a question. Why do the clerics, members of the Salvation Army or members of the armed services have a distinctive identity or uniform? The reason is that the dress or uniform reminds us and others, of a code of behaviour to which we are expected to adhere, and hopefully deters us from behaviour that might bring the uniform into disgrace.

On Sunday, the BBC will be discussing the importance of the turban for Sikhs. A researcher asked me if we wear the turban and other Sikh symbols to please God. I replied, that God, the creator of all that exists, is not the least bothered by what we wear; it’s what we do and how we behave that is important. The Sikh turban does not in itself make us better people but it does tie us to ideals that benefit both ourselves and wider humanity. By the same token it’s important to emphasise, that dress codes rooted in culture that demeans women or suggest inherent superiority of a particular faith are worse than useless

We have recently been commemorating Easter, the time of the martyrdom of Jesus Christ, when Peter, one of his closest disciples, fearful for his own life thrice denied his association with Christ. A similar episode took place in Sikh history when our 9th Guru, Guru Teg Bahadhur, was tortured and publically beheaded for standing up for the right of the Hindu community to worship in the manner of their choice. It was a martyrdom unique in religious history. The philosopher Voltaire famously wrote

‘I may not believe in what you say, but will defend to the death your right to say it.’

Nearly a century before Voltaire, Guru Teg Bahadhur gave that noble sentiment courageous utterance, by standing up for the rights of the Hindu community; those of a different faith to his own.

The Mughal rulers challenged Sikhs in the crowd (who then had no distinguishing appearance) to come forward and claim their master’s body. Sikhs, cowed by fear hesitated to do so and the body was removed by stealth, itself an incredibly brave action. It was this incident that years later, led The 10th Guru, Guru Gobind Singh to resolve that in future, those who called themselves Sikhs must be ready to meet the most daunting of challenges.

Sikhs are not alone in such commitment. All of our faiths remind us to put principles before expediency. It is not always easy to stand up for basic human rights against cruel authority, but, I believe this is the true role of religion. As a Christian hymn reminds us:

Though the cause of evil prosper yet tis truth alone that’s strong.

Though her portion be the scaffold, and upon the throne be wrong.

The hymn also reminds us that despite difficulties, with true commitment and faith, each one of us can all help turn what is described as ‘the iron helm of fate’.

We are all unique individuals confronted with varying ethical challenges in the course of our life, and with and opportunities to make a difference and work for a fairer world.

A tiny personal example. I grew up in England and first went to India in the early 60s as a newly qualified mining engineer. At the time, all States in India were allowed to have their own regional language except Punjab, where Punjabi the language of the Sikh scriptures was being replaced by Hindi.

Sikhs were angry and upset by this deliberate discrimination, but had no media voice. I thought that this was unfair—worse, not a British or Sikh view of fairness! I knew a letter in the national dallies from a Sikh would never get published, so I took on the name of a pompous neighbour in England, Victor Pendry. A legacy of Raj deference ensured that my highly critical letter was published in a national daily, causing a stir in the Sikh community. My wife knew of Mr Pendry before she ever met me. A letter supposedly from my old Head, Sylvanous Jones followed supporting Mr Pendry. Using a telephone directory, in my first interfaith initiative, letters from Hindus and Muslims rapidly followed drawing attention to the injustice against the Sikhs.

The point of the story is that in different ways, we can all make a difference by standing up to political injustice, or perhaps in combatting bulling at school or the office or workplace, and in a constant striving for greater social or political justice.

And there is much to do. Today materialistic secular society has pushed religion to the margins of society as irrelevant. In a debate in the Lords, a member commented ’religion is out of step with society’. I responded that to me, it was like someone saying ‘my satnav is not following my directions’. Religion is often blamed as a cause of conflict. It is not. It is the misuse of religious sentiment to promote irreligious ends. Religions are ethical satnavs to lead to an understanding of right, wrong and responsibility, while politicians are increasingly tempted to pander to our material desires in their attempt to win votes and allegiance.

It is not easy to go against this materialistic tide with its unthinking pursuit of individual happiness to the neglect of responsibility, but the message of Vaisakhi is that Sikhs have a duty to help move society to towards more ethical or gurmukh living.

Sikh teachings suggest that that we all fall into one of three groups, distributed in a bell shaped curve, which statistician s call a normal distribution. Physical attributes like height and weight all fall into such a distribution. It’s the same with ethical or moral behaviour. At one extreme there are the mamukhs, those who selfishly only think of themselves and are prepared to lie and cheat and even kill to achieve their ends. Then there are those in the greater middle of the curve or distribution; peacefully trying to lead their lives, but rarely looking beyond themselves, and then a smaller group, the gurmukhs, selflessly trying to make the world a better place.

The challenge of Vaisakhi is for us to resolve not only to move ourselves in this gurmukh or godly direction, but to be ready to take a stand to work towards the improvement of society as a whole. In life we all get different challenges and opportunities to make a difference. As the poet Emily Dickinson reminds us:

You cannot choose your battlefields

That God does for you,

But you can plant a standard, where a standard never flew

Our Gurus required us to go beyond lip service to Sikh teachings, and to live those teachings, taking an individual as well as a collective stand injustice against any individual or group. We can all make a difference. The message of Vaisakhi is to remind us of our potential, duty and responsibility to work for the improvement of society by working for a fairer and more peaceful world. It is an uplifting message that should determine our action and reaction to the world about us.