There is one thing that unites all Sikhs around the world irrespective of the status of their personal spiritual journey or background – that is the primacy of the Sri Guru Granth Sahib (SGGS) – the eternal Guru of the Sikhs and Guru Gobind Singh’s clear edict ‘Guru Manyeo Granth’, which recognises the Guru Granth Sahib as the only eternal Guru. But there are insidious forces at play – some with allegiance to Hindutva, who are looking to tarnish, distort and pervert the foundations of our great world religion.

Another iteration of this presented itself at the beginning of the month. On 1st September 2020, the Delhi Gurdwara Parbandakh Committee (DGPC) sanctioned discourses from the so called Dasam Granth (DG) to be read from the gurdwara. This action is a direct challenge to the primacy of SGGS. Following protests, we understand the DGPC have said this won’t happen again, but whether or not this is the case remains to be seen. As previously discussed, the authorship of parts of the DG is a matter of significant dispute. When the Sikh Rehat Maryada (SRM) was compiled in the 1940s, highly respected scholars at the time discarded the majority of the DG writings, which could not be attributed to Guru Gobind Singh. Some of these included amorphous and pornographic exploits of Hindu Gods and Goddesses, as well as misogyny and the denigration of women.

The DGPC should be ashamed of their decision to let this go ahead and we support the efforts of the Malaysian Gurudwara Council in their letter to the Akal Takht (pdf below) to take action against this flouting of the SRM. Although these events are in India, there are groups in the UK who are promoting this anti-Sikh agenda and we have pointed to this in the past. In 2018 there was the case of Amrik Singh Chandigarh – a preacher who promotes the primacy of SGGS, who was attacked by thugs associated with a sect called the Taksal. Sadly, the gurdwara committee in Southall where the incident took place did not condemn the thuggery, and at one point perversely sided with the Taksali bully boys. Another respected Sikh, is still have physiotherapy to this day, having been violently attacked over a decade ago by unsavoury elements in our midst.

All Sikh groups must openly challenge this kinds of behavior.

Sadly, groups like the tick box obsessed Sikh Federation UK (SFUK) previously failed to condemn the attack on Amrik Singh Chandigarh. We now ask them to join us in condemning the actions of the DGPC and their disregard for the SRM.

We note that in May 2019 the SFUK published a tweet which read:

Although we understand from sources that the DGPC have promised protesters that the insult to Sikh teachings won’t happen again, all British Sikh groups should unequivocally condemn the course of action originally taken by them.

This includes The SFUK, Sikh Council UK, The Sikh Assembly and City Sikhs. 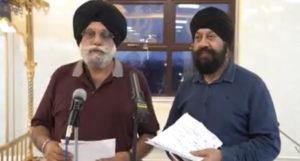