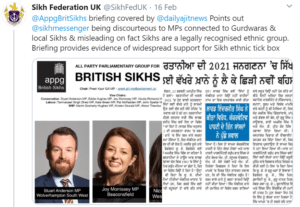 It is no secret our relationship with the Sikh Federation UK (SFUK) has been difficult over the years, especially considering our opposition to their ‘ethnic’ tick box campaign. The SFUK has previously described our Director as ‘an 85-year old dinosaur’,[i] brought the Sikh community into disrepute with a ‘karma’ tweet following the death of Sir Jeremy Heywood,[ii] and falsely claimed that a gurdwara which rejected their ‘ethnic’ tick box argument, had written in support of the APPG’s (their) campaign.[iii]

We point to another issue which requires urgent investigation. In response to evidence we submitted to the Scottish government[iv] the APPG on UK Sikhs issued a statement, which was also later published by the Culture, Tourism, Europe and External Affairs Committee, in which they write:

‘Some MPs may have received a briefing last week titled “Why Sikhs should not have a Sikh ethnic tick box and are not a distinct ethnic group” from the Network of Sikh Organisations (NSO) headed by cross-bencher Lord Singh. Disappointingly the NSO briefing is biased, misleading and includes matters that are totally irrelevant to the issue at hand.

The NSO and its head have shockingly described MPs on all sides backing the Sikh community in this campaign as “naïve” and “bewildered”. This sort of language is hugely discourteous to hundreds of elected MPs who have had letters from constituents in support of this campaign and in many cases discussed this issue locally at Gurdwaras on many occasions and with individual Sikh constituents.’

Contrary to what is written, we did not use the word ‘bewildered’ so it’s odd that this has been included. However, more significantly still, the introduction to the APPG document appears to have been agreed in principle with three newly elected Conservative MPs.

We wrote to all three MPs, when we first heard about the briefing and the related Indian press coverage which cited them,[v] when the latter was publicised alongside their images on Twitter by the SFUK on 16 February 2020. We indicated they appear to be a signatory to, or at the very least in agreement with the contents of the document whose introduction we have cited above.

We asked them if they were aware of the document and or the related Indian press coverage.

One of the three got back to us and said they were not aware they had signed anything, nor had they read the coverage, which was published in Punjabi in the Daily Ajit publication in any case (and would have required translation) – adding:

‘I’m happy to consult my constituents on this issue rather than take a particular view myself.’

This response not only indicates an open mind on the census issue, but makes it clear they are not party to the SFUK/APPG position on the census.

We believe it is difficult in the circumstances, to then imagine the same MP support a briefing which attacks our charity and is egregiously partisan.

We have written to Preet Gill MP the Chair of the APPG, and the SFUK (the APPG secretariat) to ask them to confirm as a matter of urgency if the MPs whose names have been included at the bottom of the briefing published by the Scottish government provided their express authority to do so.

We believe the Sikh community requires an explanation and will be reporting the matter to the Conservative party to investigate further. At the time of writing we are yet to hear back from either Preet Gill MP or the SFUK, but we are willing to publish their response if we receive it.