Gurpurb vadhiya on this anniversary of the birth of Guru Nanak the founder of Sikhism.

At the time of Guru Nanak’s birth, religions both in the West and East were engulfed in bitter rivalry with each claiming a monopoly of truth and a special relationship with God. In his very first sermon Guru Nanak taught:

That is, in God’s eyes there is neither Hindu nor Muslim. That God is not interested in our different religious labels but in what we do to make the world a better place.

Guru Nanak taught that to move in this direction, we must be committed to freedom of belief and respect for those of different faiths, the equality of every human being, gender equality and a life committed to the service of others. Guru Nanak’s uplifting teachings were not only for the people of Punjab or India, but for the whole world.

Today with a virulent COVID-19 pandemic engulfing the world, and with democracy and human rights under assault in many countries, we need to reflect on the Guru’s positive guidance for a fairer and more peaceful world.

This year’s commemoration comes at a difficult time for Sikhs in India with the Modi government’s discriminatory action against farmers in Punjab in an attempt to destroy their livelihood by reducing prices paid for crops to facilitate land take over by big business. Sikhs abroad have a particular responsibility to speak for those who cannot speak in India.

Sikh teachings on tolerance and respect for others are a powerful antidote to narrow-minded intolerance, today, we should pledge ourselves to living and promoting Sikh values in ourselves, our children and in wider society. The best way we can celebrate the birth of Guru Nanak is to follow his uplifting guidance in working for a fairer and more peaceful world. 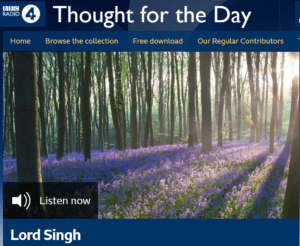