The importance of the Guru Granth Sahib to Sikhs 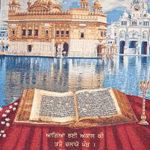 The metaphor ‘living Guru’ emphasises the importance of the Guru Granth Sahib to Sikhs. Unfortunately, as we see in some gurdwaras, some Sikhs take this too literally. I think it is better to describe it as the embodiment of the Gurus’ teachings and the SOLE perpetual guidance for all Sikhs. We emphasise the importance of the Guru Granth Sahib every time we conclude the Ardas with: ‘Saab Sikhan ku hukum ha Guru Manio Granth.’

With this clear injunction in mind, why the deafening silence from Sikh leaders and Sikh organisations about the antics of those in Patna Sahib who have placed the cleverly named Dasam Granth alongside the Guru Granth Sahib? Why the silence over the action of the Jathedhar there asking us, on the 350th anniversary of the birth of Guru Gobind Singh, to ignore the Guru’s clear injunction on the primacy of the Guru Granth Sahib and say, ’Guru manio Granth and Dasam Granth’.

Those who have studied the Dasam Granth will know that for the most part it consists of praises of Hindu avtars, denigration of women and frankly pornographic tales. Could there be a greater insult to our Gurus and the world Sikh community than placing such writings, wholly contrary to the Gurus’ teaching, alongside the Guru Granth Sahib?

Sikhs should wake up and ask, why has the government of India spent hundreds of crores of rupees printing and distributing the Dasam Granth, other than to dilute and Hinduise Sikh teachings?  Something the Punjab government did a few years earlier for similar motives.

The Network of Sikh Organisations UK (NSO), has consistently emphasised that the Guru Granth Sahib is the sole religious guidance for Sikhs and we should shun all sants, babas and now politicians and self-seeking Jathedhars who would have us believe otherwise. This is the position of the NSO.

What though is the position of the Sikh Council, The Sikh Federation, the Sikh Network, Ramgarhia Council, City Sikhs, British Sikh Federation, Nishkam Seva Jatha (whose leader Mohinder Singh is in Patna) and similar organisations in the USA, Canada and other parts of the world. The world Sikh community is entitled to clear unequivocal answers and action from those who claim to represent them. Silence also speaks volumes.