The NSO Marks the Annual Festival of UK Parliament Week 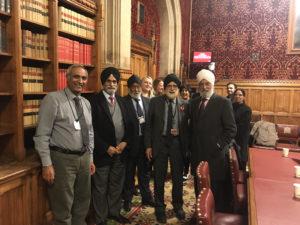 We are delighted to be official partners for UK Parliament Week (UKPW) for the second year running. This year we held a series of events to mark UKPW. On 13th October we organised a workshop at Sri Guru Singh Sabha Hounslow, where Ruth Cadbury and Lord Singh of Wimbledon addressed an audience of over 100 children and adults. The speakers explored how we can better engage with parliament and the democratic process. The Q&A afterwards was a highlight, especially because of the excellent questions to the panel from young children – who wanted to know about policies around knife crime, the environment and Brexit. They were fully engaged and had also participated in a parliament quiz earlier in the day conducted by Barinder Kaur from the gurdwara.

On 4th November we held an event in the House or Lords and were delighted to be joined by Annie Waddington from UKPW who addressed the audience about this year’s campaign, as well as Gurpal Virdi former councillor and author of Behind the Blue Line. Gurpal asked the attendees to mark with a short silence the anniversary of Kirpal Kaur Sandhu – Britain’s first Asian female police office and then went on to talk about his battle for justice and how his engagement with democracy helped. Annie talked of approximately 12,000 events up and down the country celebrating UKPW, in which almost a million people have participated. She told the audience, ‘It starts with you.’

The speakers reinforced the importance of our responsibility in acting – they said, ‘don’t sit on the sofa moaning’, and described the ways in which we get involved in issues we are passionate about to make the changes we want to see.

Lord Singh closing the meeting said, ‘we must take personal responsibility in engaging with the democratic process, and we are all equal stakeholders in this regard. Otherwise, there is a tendency for government to look to people who make the most noise, and they aren’t always representative of majority views.’

Here’s a link to a blog written by our Deputy-Director Hardeep Singh for UKPW.