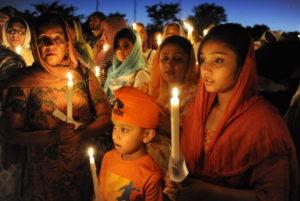 This week the government announced a ‘refresh’ of Action Against Hate (2016) their four-year hate crime action plan, to ‘address specific concerns across all 5 monitored strands of hate crime.’ New measures like a Law Commission review into whether additional protected characteristics like misogyny and age should be legislated for, and ministerial round tables to specifically address Muslim and Jewish concerns headlined. However, despite being subject to serious violence and hostility since 9/11, the ‘refresh’ has managed to marginalised British Sikhs yet again. This has been particularly galling for the NSO for the following reasons:

Although Sikh groups like the NSO, The Sikh Council, The Sikh Federation UK and City Sikhs have all expressed concerns about Action Against Hate (2016) when it was first published, the ‘refresh’ makes it clear the government is unwilling to address the wider ramifications of Islamophobia on Sikhs, or the ‘Muslim looking other’. A simple acknowledgment that Sikhs face Islamophobia would have allayed concerns. Like us, many will be right to ask the government why ministerial ‘round tables’ are the preserve of Jews and Muslims, and why the True Vision project announced in 2017 has still not been implemented.